The Shree Mahendra School is a government funded school and celebrated its 50th year in 2010.  Though for many years the school had approximately 200 pupils, during the Maoist conflict in the 1990s when many private schools throughout Gorkha and Nepal were closed down, then the number of pupils at Shree Mahendra rose rapidly to 800 pupils.

In recent years funds were gained from the government, various overseas charities and with help from parents of the pupils to new buildings were gradually built to provide  extra room and to update facilities.The original school buildings were seen to be no longer in a safe condition were removed 2011.

Earthquake Update – Many of the schools in and around Gorkha were damaged or destroyed.  One of the new buildings of Mahendra Jyoti was deemed unsafe by engineers in April and will have to be demolished.  Many classes are now undertaken in the temporary classrooms built as emergency with galvanize roofing funded through Gorkha development Scheme who funded classrooms in 10 local schools. 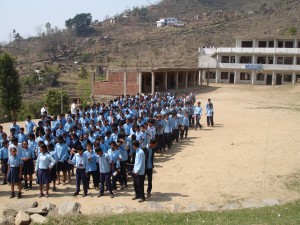 As a government school there is a set curriculum to include   Nepali, English, Maths, Science Health, Population (Geography).  There are limited resources for extra activities but a small computer room has been used with some older students and art classes were started as after school activity.  Though sport is loved by the boys especially, this tends to be in play rather than any taught classes.

The classes are fitted with bench style desks and white boards installed but not necessarily an improvement!.  Younger classes from aged 7-10 tend to be small (partly due to the recent re-opening of many private schools in the area and a trend towards teaching in English) but older students are in classes of up to 50.

The children start school at the age of 4/5 in reception and may remain at the school until approximately 16 when they take the final SLC exams (equivalent to GCSEs).   If for any reason a pupil does not pass exams at the end of each year then they will retake the year which leads to classes of mixed age.   Unfortunately many of the children do not complete their education due to family commitments needing them to work at home. 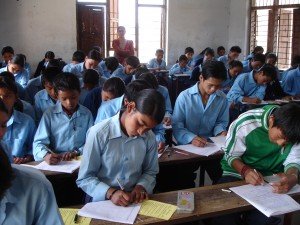 However, more children now wish to stay at school to age 18 for equivalent of A levels. From here, they may enter a local undergraduate programme till 18 for the

School Sponsorship  Prem Bhadur Thapa was Headmaster at the school for many years until he retired in 2008.  He helped introduce the sponsorship programme at the school in liaison with Linda BluntThe aim of the programme was to offer sponsorship for those students who showed good progress and potential in their studies, though due to their background and lack of finance they would be unlikely to continue at school.  Many will be from the poorest families; others may have to start work due to the loss of a parent for example.

Staff at the school helps to select the neediest children and those selected will receive full uniform for the year, as well as books needed and for the older children any fees such as exam fees will be paid. 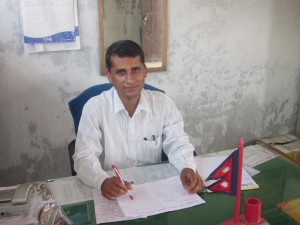 In 2008 Laxman Acharya became the headmaster and now liaises with Linda to confirm the nominated children each year.

2016 – we are pleased to be able to confirm that Mr Ronald Hook and his wife have funded 14 children at Mahendra Jyoti, One girl and one boy from classes 6-12 (aged 11-18) The aim is that this is a long term schem to be set up as a trust. This programme can make such a difference to many lives

Volunteers are welcomed at the school to help both staff and pupils develop their level of English and to work with individuals and groups.   Traditional teaching and learning is based on learning topics by rote.  This means that there is little opportunity for interactive learning and so volunteers are encouraged to work with teachers to help them develop a more interactive style.  With the limited resources it can be a test of initiative to be inventive and spontaneous in the approach, with the aim of showing that learning can be fun.  After the initial shy start most pupils love the opportunity to join in.

Some of the staff are keen to gain experience and ideas for changing lessons and this can be very rewarding for all.

There may also be opportunities to work at other schools in the region or helping students at the nearby college studying up to undergraduate level.