In the summer of 2013 Viv and Claire Chipperfield opened their immaculate bright and colourful garden near Harlow to the public to raise money for a number of charities including GDS and raised £384.42 from the day -wow! In 2014 they did it again and invited us to be one of the charities and to sell plants we had grown for the Nepali charity over each of the 4 open days. 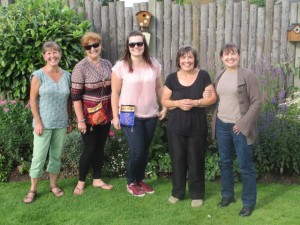 Viv and Claire work tremendously but they worked hard to bake the most delicious cakes to serve with teas and coffees.  Despite the summer weather of sun, cloud, cold wind and several deluges of rain, it raised a total of £1056.30 for the charity.

GDS were invited to sell plants which had been grown by Trustees Lin and Jan, and the wide ranging mix of herbaceous, herbs and mixed planters raised over £600 this year.

As it was World Cup fever then Lin had compiled a quiz linking plants to the world cup countries, and the cryptic clues led to great discussions over the teas and cakes. Prizes of tulip and daffodil bulbs were given to those with good answers.

The garden party would not be complete without the extraordinary and prolific voice of Vivs other daughter Sarah who sang so beautifully and with such ease it was wonderful.  ‘Its raining men’ will never be heard again without the vision of Sarah continuing her performance with a deluge of rain hammering around us! Just great.

Viv and Claire moved into the house in 2003 and it was fully adapted to accommodate Claires disability since an accident in 1997.  The grit and determination of Claire and Viv together with family and friends to help Claires recovery means that she has been able to overcome so much to now lead a full life far beyond expectations ( apart from hers and Vivs that is). Her love remains horses and she rigorously undertakes therapies to enable her to ride as often as she can.

Viv spends all her free time working in the garden which is also laid out to enable Claire full access.  Good pathways and patio space are accented with many colourful collections of pots and seasonal flowers. The garden room is a lovely outdoor space for shade in the hotest summer days.  Lots of seating around the house ensures you can sit and enjoy the garden from all angles.

All of the borders are colour co-ordinated from yellow, blue, red, orange and even a black border.  Under the beautiful weeping willow tree a tranquil green and white garden and more seating makes a pleasant hide away. 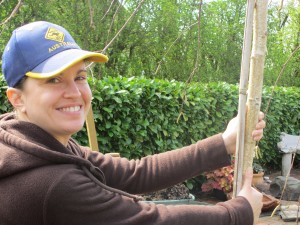 Over the winter months Viv wanted a change to two older established beds of conifers. After lots of wet and cold work, Lin and Matt helped to remove all the previous planting, recondition the soil with lots of compost added, and now one bed of mixed shrubs will provide structure for the additional summer flowers. The other area was turfed  and ‘Sally’ the affectionalatly named Betula utilis ‘Long Trunk’ (as in Long Tall Sally!) was planted ceremoniously as a specimen tree. Sally is responding well to the loving care she gets and will provide a weeping lawn specimen of the future. 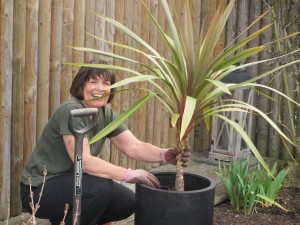 Viv works tirelessly in the garden which she loves.Up early watering in the summer months to ensure the garden is at its best for the open days, with each plant looking its best and an overall splash of colour. A real credit to all the effort she makes.

Thanks to everyone for their help in all the effort made in making this happen especially Viv and Claire as well as Sarah, Lin, Jan, Naomi, Roz and Jane and of course those who bought plants, gave donations and ate cakes! All for charity of course.