This programme was started in 2007 by a former 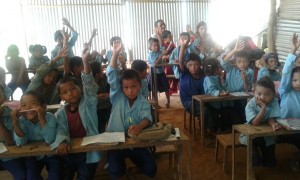 volunteer which was based upon the internationally renowned WASH programme. The aim was to develop a simple programme to educate communities through children in the remote and poor areas around Gorkha focusing on how to improve the hygiene of their living environments. Members of Gorkha Women’s Association (GWA) were keen to become involved in the planning and implementation of this project and have since continued to develop and deliver this programme. 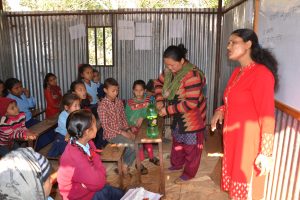 The programme is run in selected schools in the poorest areas of Gorkha and the surrounding villages, where it has been identified that a community may have poor hygiene practices and therefore be vulnerable to disease.  The course is typically 12 weekly sessions but may be fewer longer sessions if in a more remote location, and children are encouraged to pass on their knowledge to family and friends at home. Teachers at the school are involved so that they will further encourage the children  to maintain the hygiene practices after the programme has concluded. 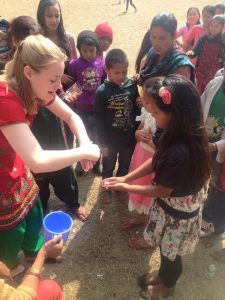 In rural Nepal, households still have to 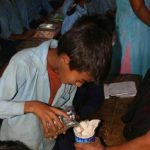 carry water from the village tap, many people have never owned a toothbrush and they don’t always have their own toilet. The children’s hygiene programme covers topics such as personal hygiene, clean drinking water, avoiding the spread of diseases, keeping the home environment clean and good toileting practices. The classes get all children active in discussions and group work and include practical and fun sessions, for example making water filters from plastic bottles. The beginning and end of the course includes a repeated short test as a way of measuring how much the children had learnt during the programme. 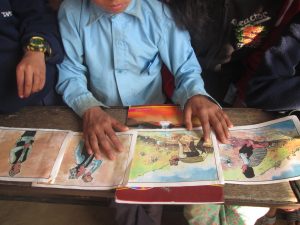 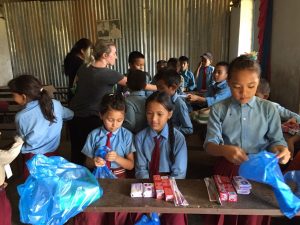 Upon completion of the course, the school is given buckets and sweeping brushes for the classrooms, and the children are each given a bar of soap, nail clippers, a toothbrush and a tube of toothpaste to encourage them to get into the habit of using these items regularly.   The cost of the Children’s Hygiene Programme is between £250 and £300; this provides an income for the GWA Trainers, covers their transport and expenses and the purchase of all resources for the sessions. 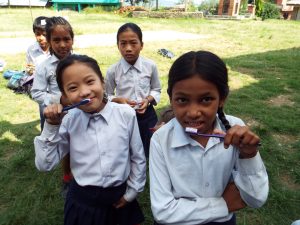 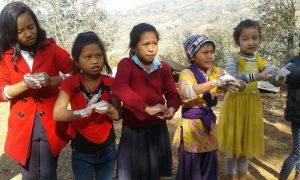 The Women’s Health Programme was established in 2017 and has been extremely successful. Following discussions with the GWA, the Gorkha committee (GDHEDS) and Gorkha Hospital, GDS became aware of common women’s health problems in the Gorkha District.  As GWA was already running the well organised hygiene programme with children, they were well placed to expand their community health projects. Due to the more specialist nature of the Women’s Health Programme, GWA run these sessions with professionals i.e. doctors and health professionals from Gorkha Hospital which is also beneficial in strengthening the link between more rural women and the government hospital. 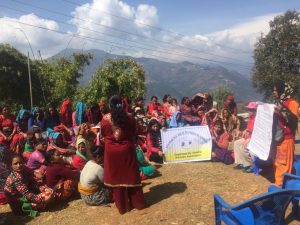 The team have travelled to different parts of rural Gorkha (sometimes walking hours in the rain!) as they are keen to support the education of women. Typically,  20-60 participants attend  the women-only sessions where the ladies are able to talk freely and share their stories without judgement.  The health problems are  often inter-generational and most  women are not aware that their condition may be treated, for example, that issues with birth control and uterine prolapse can be managed or repaired. Following the session, women can have a private discussion with a Doctor who frequently recommends them to visit Gorkha hospital for treatment,  fixing issues that may transform the lives of those rural women suffering from a range of conditions. 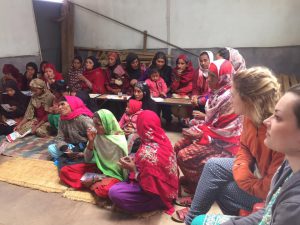 As part of the funding application, GWA requests food to be provided for everyone involved during the one-day event; this has turned out to be a highly effective incentive for the otherwise ‘reluctant’ ladies to attend and also allows time for long discussions to take place. Multiple volunteers have joined the GWA team for these educational sessions and they have all reported how beneficial and necessary they are to rural women. 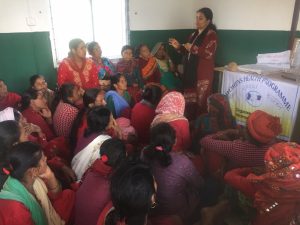 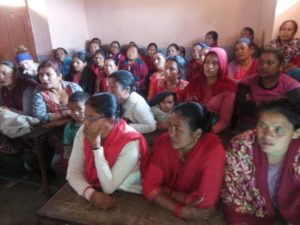 The cost of the Women’s Health Programme varies between £150 and £200- depending on the size of the group and whether transport is required.

Since GDS was established in 1988, there has been a close link with the government funded Gorkha Municipal Hospital. The hospital is a small district hospital with up to 50 beds and very limited resources, and it serves the very large expanse of Gorkha District. The patient population is mixed between people who live in Gorkha town and people who live in the more rural and remote mid hills of the region.

Many patients endure long journeys to get to the hospital, however alternative hospitals are even further away in Kathmandu or Pokhara, taking another 4-6 hours drive. There are several small private hospitals in Gorkha which are not an option for many rural Nepali people due to the expense.

The medical problems in the area consist largely of communicable diseases, 50% of which affect the under-fives. Many patients do not go to the hospital until their conditions are well-advanced. This is usually because the distance from home is too great (some have to walk for days to get to the hospital) or because the cost is more than they can afford. Patients pay for their consultations, in patient care and treatment, but if a patient is over 60, or is very poor, the care is paid for from the Hospital Poor Fund. This decision is made at the discretion of the doctors, and there is no formal assessment. 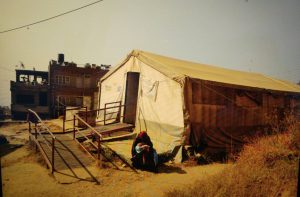 Government funding to Gorkha hospital has always been limited and the difficulties were exacerbated by the devastation caused to the hospital by the earthquakes in 2015. At this time many patients were treated outside on the hospital grounds due to the structural damage of the buildings. Conditions have remained extremely difficult ever since. 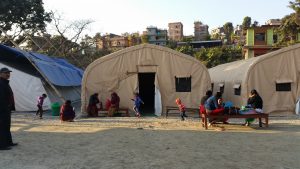 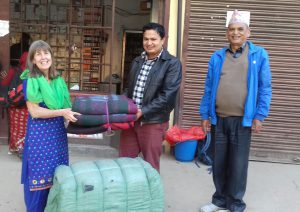 GDS has been asked to fund wheelchairs, bedding and blankets then in 2017, GDS were approached by the main Doctor to help by providing funds for oxygen concentrators. 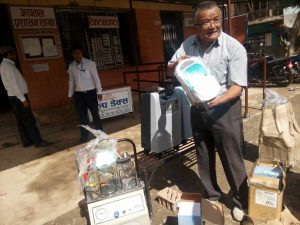 At the time, Dr Santosh wrote:- “As we all know that oxygen supply is one of the basic thing that a hospital need for service delivery. Our hospital don’t have its own oxygen supply plant. We are totally dependent upon the oxygen delivery into the cylinders from Bharatpur, Chitwan. These cylinders get emptied very soon and need to be replaced.  But our main problem is we don’t have any stock cylinders and the transporters carry these cylinders only when all of them are emptied. So for that transaction period there’s been scarcity of oxygen in our hospital. Many times we need to refer the patient just because we don’t have oxygen. And the road condition of Narayanghat – Muglin is so unpredictable that we aren’t getting the supplies on time.” 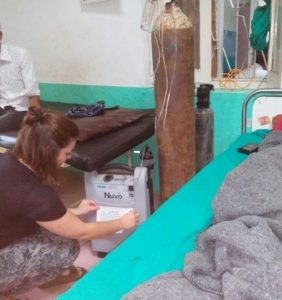 Basically, if a patient needed oxygen and the last cylinder ‘ran out’ then there was no way to help. A concentrator simply draws oxygen from the atmosphere and supplies to the patient at a concentrated level.

Trustee Naomi was able to visit the hospital and see the concentrator in working order. 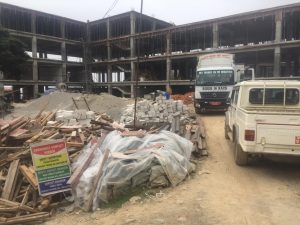 In 2020, the damaged hospital was demolished in order to rebuild a new 50-bed hospital through German funding.

With the Covid outbreak work was halted but it is hoped that the completed building with new equipment will make such a difference. Attracting doctors to stay for prolonged periods of time has been an ongoing issue for Gorkha hospital. Considering the planned facilities in the new hospital, including staff accommodation, there is hope that doctors will be more willing to work in Gorkha for longer, which will encourage consistency and allow better collaboration with GWA and the Gorkha committee (GDHEDS).

If you would like more information about helping the hospital , see past projects.