Our projects have always focused on health, education and supporting the community, and are run in collaboration with our sister charity in Gorkha GDHEDS (Gorkha District Health and Education Development Scheme). The local committee is encouraged to prioritize where funds are best spent to support the poorest within the community, and all volunteers and electives both support, and are involved with projects where possible.

Current programmes focus on school hygiene, women’s health, hospital equipment, teacher training and school sponsorship which all have long term impact. However, as an established charity with local links, we are also able to respond to emergency requests such as following the devastating 2015 earthquake which caused such destruction in the region. 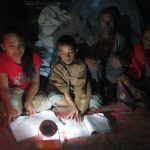 £10,000 raised by GDS funded materials for makeshift classrooms in 10 schools, provided hospital blankets, health kits, solar lighting for homes and jumpers for small children. More recently, at the outbreak of the global Covid pandemic in 2020, we were able to fund full protective clothing and additional oxygen to the local Gorkha hospital.

Some projects have been self-sustaining such as sewing machines for clothes making, whilst others offered skills but were not successful enough to continue such as card making, Nepali doll making and vegetable production, and we obviously learn much from such experiences. Where appropriate we will withdraw from a project for example in the 1990s, we funded mother and baby clinics in rural villages which were later transferred to the Gorkha hospital, and toilet buildings in schools were later funded by the government.

Our future aim is to share funding with the local government where possible on projects such as teacher training, and we also aim to search and apply for outside funding.

Everybody involved with this charity does so voluntarily.

There are no wages and no running costs.

Every pound you donate goes directly to projects in Gorkha.

You can be sure you will make a lasting difference