Support after the 2015 Earthquakes 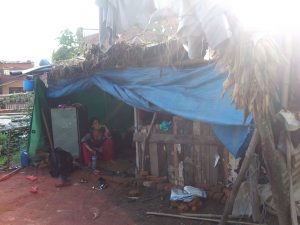 On 25th April 2015 Nepal suffered a massive earthquake which ended up killing nearly 7,000 people, injuring nearly 18,000 and displacing 2.8 million people. The epicentre of the first earthquake with magnitude 7.8 was in Gorkha district and Gorkha and surrounding villages were affected greatly with some towns such as Barpak virtually destroyed. Homes were lost including that of our secretary Sarita and family where Trustees and many volunteers had been welcomed.

There was a global response to the disaster and Gorkha became the working centre for many international charities.

GDS were in the position to respond to GDHEDS calls for help and £10,000 was raised and spent on projects directly requested by the community. NO wastage of funds, all money raised helped immediately. 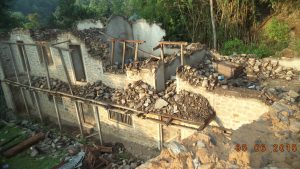 Over 400 schools in Gorkha District were damaged or destroyed. This included schools we work with Shree Mahendra was damaged and some buildings had to be demolished. Sansari High was destroyed. 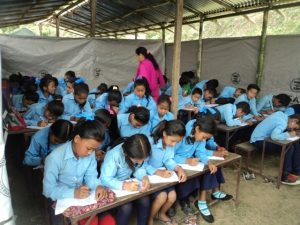 School Classrooms – GDS was able to fund galvanised sheeting to supply 10 schools with makeshift classrooms and the local community built themselves at no cost.Getting back to school quickly was so important for the traumatised children. 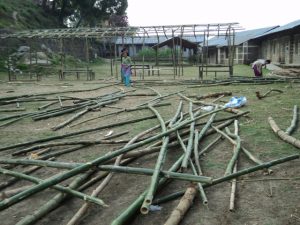 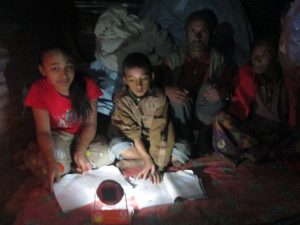 Solar Lamps – We were able to help in other ways as requested. Many homes had no electricity supply and solar lamps were distributed to the families of school children so they could continue studies.

School Jumpers – GDS provided funding for several hundred school jumpers costing £4.00 each which were specifically requested for the younger children in more rural schools.  Of course, there is no heating though temperatures are well below 10 degrees C in winter and the children own very little or no warm clothing so will otherwise shiver in school. 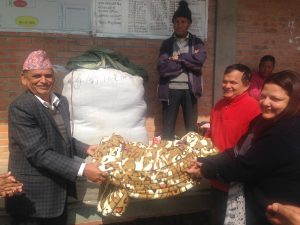 Hospital Blankets – Gorkha hospital was also damaged in the earthquake and tents were provided by INGO’s GDS was requested to supply blankets for patients as winter approached, and also wheelchairs for movement around the site. 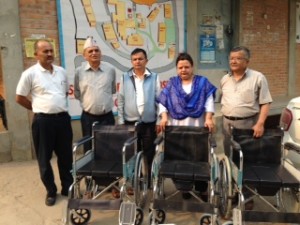 It was not until 2019 that the hospital was demolished to start rebuilding.

During the 30 years that GDS has been working in Gorkha, a range of community based projects have been undertaken which has included working in partnership with local groups and NGOs.  These  local groups were aware of the needs of the community and so linking with them has provided support for locally selected projects. Such groups have included the well known international groups with bases in Gorkha to include The Rotary Club and The Lions Club as well as international charity Child First.

The Youth Movement for Environment (TYME) of Gorkha was formed to encourage the young people of the town to be involved in community projects. An early project included the distribution of waste bins in the town to enhance street cleanliness in the community. GDS became involved with TYME through the funding of village outreach clinics (see below).

Early work with Gorkha Hospital – In the early 1990s, a qualified British nurse Chris Marion, raised over £10,000 and collected medical supplies to take to Gorkha local hospital. At this time Chris, together with members of the community helped to clean and paint the wards of the small hospital.

Ambulance – Gorkha Lions club were supported as they tried to gain funds to repair a much needed ambulance.  Funds were raised in the UK and the vehicle was repaired

Equipment – Volunteers involved in medicine helped in the earlier years by providing much needed equipment and medical supplies to the hospital.

Funding for hospital supplies and equipment have continued in some way since the beginning of  the charity though equipment is now requested specifically, sourced locally and funded by GDS.

Electives – Medical electives programmes have been running successfully via GDHEDS for nearly 30 years. Many medical students have had the opportunity to spend time in the small Gorkha District hospital with a well established network of homestay accommodation through GWA and support for the students from local committee members. These volunteers also had the opportunity to get involved in other GDS projects. 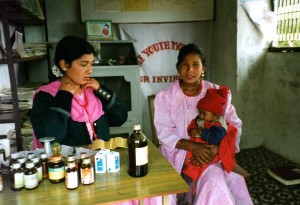 Mother and Baby Clinics From 1990 Gorkha Youth Movement (TYME)members started baby clinics in villages surrounding Gorkha focusing on the health of infants and their mothers. Members planned all clinics and accompanied the medical nurse from the hospital who administered the government vaccination programme and undertook general health assessments. 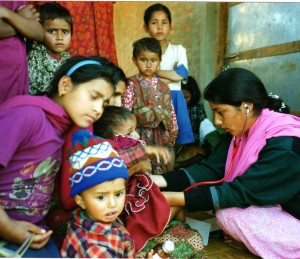 A rural clinic organised by the Youth Movement. 5 clinics per month were funded by the charity

GDS funded these clinics at £300 per year to support monthly clinics in five regions supporting up to 30 women and children assisted on each visit. The costs covered: vaccination and medicine costs, nurse time, and a porter to carry the medicines and equipment required for expectant mothers and newly born babies. The more specialist help given and the care available helped reduce the risks associated with rural childbirth and childcare.

The young volunteers organised the clinic and kept records of the clinics for 10 years then in the later years of the project government run clinics at the hospital improved and villagers began to attend these instead. The numbers attending the rural clinics declined and the programme was no longer needed. TYME former member Yong Kumar Shretha remains a member of GDHEDS. 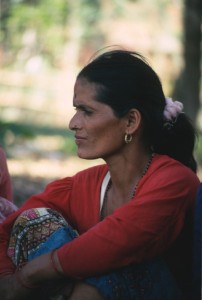 Health Education and Sanitation  In 1995, Members of the Gorkha Women’s Association – GWA were encouraged by volunteers and with the help of a local headmaster, doctor, nurse, and sanitary engineer, they held a seminar on health education. This involved about 40 women from surrounding villages. The information gained at the seminar was used by the delegates to give advice and help their own communities. 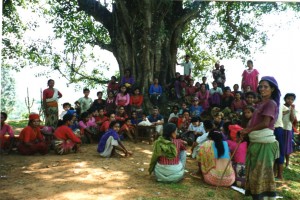 Water Project   In 1999, GWA made a proposal for a drinking water scheme through Water Aid and Nepal WaterAid (NEWAH). A feasibility study was done by volunteer engineer Mr. Ron Hook from the UK and resulted in a programme of water, sanitation improvement and health education. 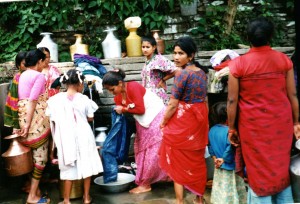 The Tap – washing clothes, bathing and all water collection for the local community. 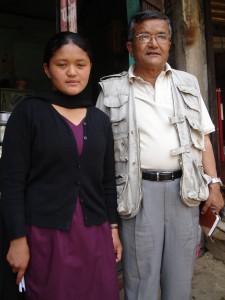 A nurse training programme was available in Gorkha which aimed to develop basic skills needed for nursing in a rural village. One student from a poor rural location with an interest in nursing was selected and was sponsored.  £300 provided the complete course of training to include tuition, uniform and fees with living costs met by the student.  The 15 months of training was undertaken at Gorkha Nursing Academy and provided medical studies to include practical application of skills. The aim was that upon completion, the student would gain employment in a rural location in the Gorkha district. This sponsorship programme was sponsored for approximately 10 years.

Books and equipment – Over the years, much equipment including books, musical instruments and other classroom essentials have been sent to various schools in the region,as well as the campus and these have been sponsored by GDS.

Schools – GDS helped with the repair of buildings, insertion of windows and provision of school benches as well as constructing basic toilets.   GDS worked with other charities including Child First and a French charity from Alsace to administer these projects and some funding was given by the Chelmer Bridge Rotary Club and the Lions Club in Chelmsford 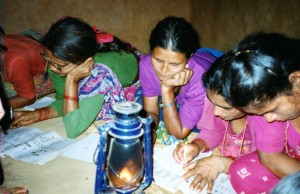 For a number of years, GDS funded numerous literacy classes, including classes held in nearby Sauli Bazaar, and another local village, Taranagar. Trustee Linda Blunt provided funds for the building of a small community meeting building in Sauli Bazaar, which was used for meetings and literacy classes for the local branch of the GWA.

The following year when Linda returned, she was able to witness the literacy classes taking place and saw that these were often held by lamplight as there was no regular supply of electricity. The ladies were not deterred as they were thrilled to have the opportunity to learn to read, and in addition helped them see the importance of education and therefore would be more likely to send their children to school.

Training and Income generation for women

Through  the Gorkha Women’s Association(GWA), a number of training sessions were funded over several years to develop skills of local ladies with the aim of creating an income for the rural poor. Though items were sold and the projects broke even, without defined markets for the goods, most of the projects were not continued. 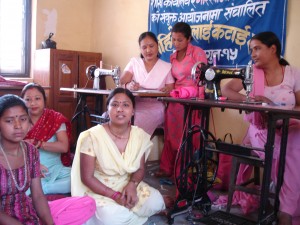 Sewing Machines and Classes In 2007, GDS provided funding for five sewing machines and sponsored several courses of sewing classes for members of the GWA. The training involved making basic everyday clothing items and was very popular. Some of the women have gone on to make clothes for their family, friends and neighbours.  This project has been repeated in several villages with more machines purchased. 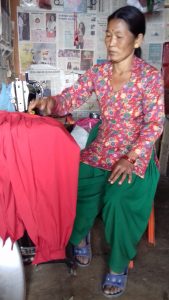 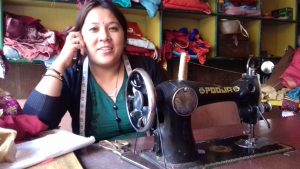 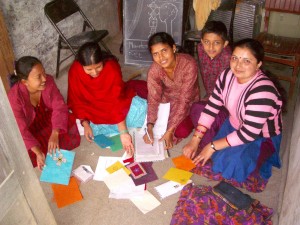 The GWA experimented with a number of other profit-making craft business ideas, including card-making, doll making, incense making, and weaving projects, all of which were funded by GDS. Though skills were gained, there was not a longer term programme for marketing and the programmes were not continued. 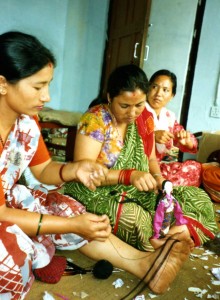 School Sponsorship – The early days.   In the early 1990’s, two school sponsorship programmes ran in both Gorkha town and a rural school Bindhyabasini, Naraswar. Sponsorship was provided for poor children to attend school. 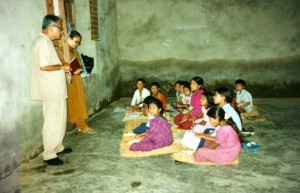 A small hillside school was started for lower cast children who had never had access to schooling.  The school was initiated by Mohan Shrestha of Gorkha and was run by his daughter Kabita with the school running from 7-9am each day so as not to disturb their ability to work at home.  30 children were sponsored each year with many sponsored by Dorset Women’s Institute.  In 1996 this school was handed over to a former volunteer  and has since become a Government run school with some sponsorship from the UK continuing.

The Annapurna school closed during the political uprising of the 1990s, and the children were transferred to the Shree Mahendra Jyoti School in 2003 where the sponsorship programme continues today.

The current School Sponsorship Programme is managed by Linda Blunt and Laxman Archarya and over 60 children are supported in 5 different schools. Those seen to be the brightest and most determined under-privileged children receive uniform, shoes, school equipment and exam fees where applicable to ensure they can complete school to SLC or even A level equivalent. 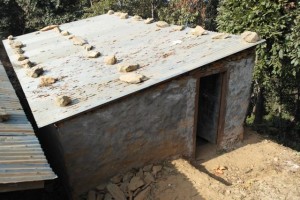 A project to provide proper toilets in schools which cost approximately £3,000 per school was requested. We requested that at least one third be raised by the school and this was paid in kind through the use of parents’ for labour.  Proper toilets with a water supply and instructions for cleaning make a massive difference in reducing the risk of the many diseases linked with poor sanitation. 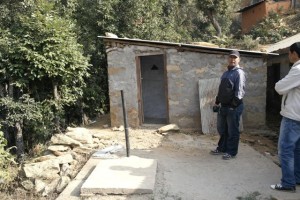 Update from Volunteer Naomi Cairns January 2013. I visited the toilet project at Gorkhali lower secondary school with Yung Kumar Shrestha. On first appearance I was impressed at the size of it, as I was expecting a smaller building, but it was a decent size, with a section for boys and girls. The infrastructure of the building was sound and was made from local materials by local people, which was what we had requested.

Aesthetically the building wasn’t great, it was concrete and stonewalls, and could do with painting; The boy’s section has one toilet and a section of urinals, which I was told was not big enough for the amount of students at the school so this may be extended. The girls section was the same size as the boys, with one toilet and also a section of urinals, which he said was unnecessary for the girls and maybe this could be changed to more toilets.

Note, following the destruction of many schools in the 2015 earthquake, school toilets were not prioritised.  The government is now providing toilets in schools – slowly!, but the toilets remain very basic, have limited water supply and are not easy to keep clean. certainly not what we would expect from a western toilet!