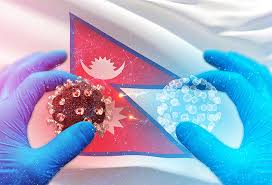 On the 24th March 2020 Nepal entered lock-down just one day after the UK. As the global pandemic took hold then these dramatic measures seemed hard to believe.

The Nepal lock-down continued for 120 days until 21 July with no rules allowing for exercise and only limited shops open for essentials, children missed 9 months of study as the schools remained closed with little opportunity for remote learning. People really suffered.  Localised lock-downs continued throughout 2020 and as schools opened at the end of the year, then UK schools once again closed.

Though deaths and recorded cases remain relatively low at 3,000 in Nepal, there has been limited testing to present accurate figures.  The vaccine roll out in is underway for those over 60 with vaccines from India and China but challenges remain to reach those in rural mountainous communities.  The effects on poverty in the country will no doubt be long lasting with little support for those thousands who have lost their jobs in the local economy, in Himalayan tourism and work overseas which has disappeared.